The wiring of the ZS-042 is very simple.  I only made for connections to make this clock work.  This module works on I2C (Inter-IC) communication.  In my case, I wired VCC to 3.3v on the Uno, GND (ground) to GND, SCL (Serial Clock) to SCL, and SDA (Serial Data) to SDA on the Uno.   If you have an older Uno, just use A5 for SCL, and A4 for SDA.    The RTC module can be used for applications such as an alarm clock, for time stamping, or simply to display the current time on an LCD display.

I found some code on the TronixStuff website to make this module work.   Before uploading, I un-commented the “setDS3231time” line, and adjusted the clock.   I set the clock about 1 minute ahead of time, and then pressed the upload button about 4 seconds ahead of the time setting because it takes a few seconds for the upload to complete.   I didn’t want the clock to be reset to this time every time the power is cycled, so then I commented out the “setDS3231time” and uploaded again.  This code uses the “Wire” Library.

After the upload is complete, you can go to your serial monitor to very the clock is correct.  Be sure to set your baud rate to 9600 if using this exact code. 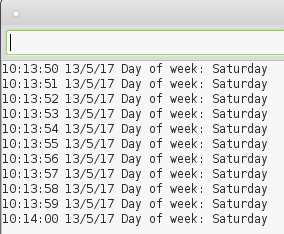 I would recommend removing  power for a few minutes then powered back up to ensure the CR2032 battery is working, then verify the time again through your serial monitor.

Once you have the RTC up and running, you can experiment with other features such as the alarm feature, and square wave generator…   This module can also store some data to EEPROM, but my main reason for upgrading to this module was for the accuracy of the clock itself.  I like to keep things as simple as possible!