In this document, I will explain the 5 dimensions that most humans can typically perceive.   It is important to understand the laws of physics, and in particular how they apply to the fourth day of creation in Genesis 1:14-19.   This document will be one of a series of posts that I will make on creation.   The purpose of these documents is to give us a better understanding of creation evidence.  We cannot fully understand exactly how God created the universe.  We were not there.   The visible things in our universe are made by that which is invisible.  With this in mind, we can certainly look at the clear evidence, however, to gain a much better understanding.

Most everyone understands that we consider ourselves to be in an immediate 3-dimensional world.   In this case, we understand, height, width, and depth.  The Zero(th) dimension is a single point in space.   To Illustrate this, you can draw a simple “dot” on paper.   I need to point out, however, that a single dot on paper is not a perfect representation of the first dimension.   A single dot on paper actually does have height, width, and the ink on the paper is a few molecules deep.  With this in mind, understand that a single point in space is a representation of a zero dimension “object”.  This will be invisible to us.

Now we will discuss the first dimension.    To demonstrate this,  draw a single line on paper.  Again, the reality is that a one dimensional object will have no height nor depth.

Finally, consider the third dimension.   We can visibly see a three dimensional object.   It will have height, width and depth.

The fourth dimension is not discussed very often.   The reason for this is because of it’s complexity.   It’s my understanding that the fourth dimension consists of warps in the fabric of space-time.  Some of you might have some more input on this, and I will attempt to clarify this section as I continue to learn more about it.   A common analogy to his is a trampoline.   The stretchy fabric of a trampoline represents the fabric of space-time.  Now imagine a bowling ball (representing the Earth) being placed in the middle of the trampoline.  The trampoline will sag in the middle.

Anything close to the Earth will begin to fall inward toward the Earth.  However, if the object has enough speed parallel to the surface of the Earth, it will always miss the Earth, and continue to travel in a circle.   A trampoline would have forces such as friction, and air resistance that we don’t worry about near as much in space.  We can think of this as causing gravity.  If an object dense and massive enough exists in space time, the fabric of the trampoline would fall below the “Event Horizon”  The fabric of space time would be so steep at the event horizon that nothing could escape.   Not even light itself, and time would stop.  We know this happens with black holes in our universe. 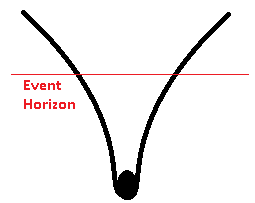 It’s very possible that the Earth itself fell below the event horizon once God added the stars, and additional gravitational forces in the universe.  Once that happened, no time would pass on the Earth…  However, consider Psalm 104:2.  “Who coverest thyself with light as with a garment: who stretchest out the heavens like a curtain:”  Once God stretched out the Heavens, the fabric of the “trampoline” would have been pulled tight…   This would have lifted the Earth above the event horizon, and moved the stars and galaxies further apart.  In addition, this would have spread out the light behind the stars as they are moved away.   Is this why we can see the stars in the sky in such a young universe, so many light years away?  Maybe this is also why they are red-shifted!  There are several verses in the Bible about God stretching out the heavens.

This dimension is much easier to understand than the others.    The fifth dimension would be the passage of time.  The forth dimension effectively connects the first three dimensions with time.  To illustrate, look at the graph below.

This chart represents your entire life, but time existed long before you were born, and will continue to pass long after we die.

Now, imagine everything you’ve ever done in your entire life traveling through all of eternity!  God knows Everything.   🙂

One thought on “Five Dimensions”

We have detected that you are using extensions to block ads. Please support us by disabling these ads blocker.