When forcing, you must be aware of your own plant’s regulations on forcing.  This document serves as a general guideline of how forces work.   It is your responsibility take all safety precautions.    It’s your responsibility to verify the accuracy of any information on this site before implementing it in any way!   You can cause severe damage to equipment and persons if forcing is not implemented properly.

Be aware that forcing inputs may affect more than one rung.  It will affect all rungs that are looking at the input that you are forcing!    Also, when forcing outputs, be aware that the output device may feed inputs back into the processor, and cause other things to happen.

Here, we will force a real world input on a rung.   We’ll assume the switch has gone bad, and we can’t find a replacement.   We will install, and enable a force to make the output energize.

At this point, the amber FORCE light on the processor will be flashing.   We will also notice the rung is indicating that the force has been installed.

Now, to activate the force, we must enable forces.   In the Online toolbar,  click your pull down window next to “Forcing”.   Then go to I/O forcing, and enable all forces.

Now, the amber force light on your processor will be solid.   You will also notice in your rung that we are now calling for the output to energize. 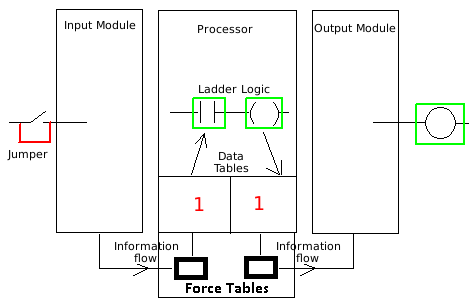 Notice the similarities between a force and a jumper.   If we jumper the switch in the real world, the status indicator will come on the input module.  Then the value of 1 will be written to the controller tag causing the logic to go true.   The output will then energize.

When enabling the force, the status indicator will not illuminate on the input module if there is no voltage on the input module.   However, the controller tag will change to the value of 1, and the rung will still go true.  The output will energize.

Note:  You can also Force tags OFF.   In that case, the simulation would be breaking the wire.

Sometimes there is a misconception on forcing outputs.   Forcing an output on does not necessarily change the controller tag for the output to a 1.   Again, let’s consider this rung:    I removed the input force we added earlier, and disabled forces to start this section)

You will then see on the rung that a force has been installed.

You will also notice the amber force light on the processor is flashing.   This indicates that a force is installed in the processor.  Now, I will enable all forces. 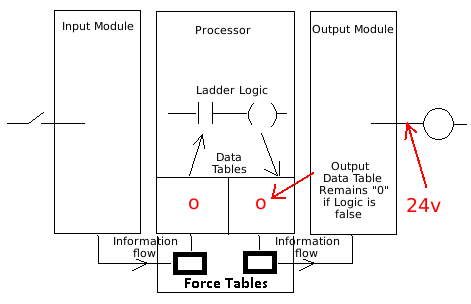 Remember:  When you force outputs such as a motor starter, the motor starter probably has auxilliary contacts on it.   When the output is forced on, the auxilliary contacts will shut, and could feed inputs back into the processor.   This could cause other things to happen in your system.  If you force a cylinder, the cylinder will move, and could hit switches that also feed inputs back into the processor.  Be aware of your entire system if you install a force or a jumper.   Similar dangers also exist if you mechanically force a prime mover.

To remove a force, right click on the forced tag, and choose “Remove Force”.

If you notice forces are installed in the processor, you can search for forces by clicking Search | Find.

Then choose “Forces”, and under “Find Where”, choose “All routines”.

Then, just choose “Find Next” or “Find All” to search through your logic for forces.

We have detected that you are using extensions to block ads. Please support us by disabling these ads blocker.