In short, a transistor is a switch.    This is much like the switch you use to turn on the lights in your home, but with a lower DC voltage, and a smaller amount of current (amps).    Instead of the switch being physically moved to turn a load (such as a light) on or off, a voltage is placed on the base (the center of the three leads) to allow an NPN transistor to conduct.

There are two main types of transistors:  NPN and PNP.  With an NPN transistor, the load is interrupted on the negative (-) side of the load, and when a voltage (such as 5v) is placed on the base (the center conductor) through a resistor, the transistor will conduct and turn the load on.   With a PNP transistor, the opposite occurs.    The PNP transistor interrupts the positive side of a load (+),  and when the base sinks to ground (again through a resistor), the transistor will conduct to energize the load.    A resistor limits the amount of current flow through the base, and current will flow from the emitter to the collector (the other two leads in a PNP transistor), then through the load to ground.

Remember, the Emitter is connected to + in a PNP transistor, and to – in an NPN transistor.

Why use a Transistor?

In the diagram, you can see that the positive power rail is wired to the positive lead of the LED through a 1K resistor.    The negative lead of the LED is interrupted by the NPN transistor before going to the negative power rail.   When the button is pressed, a positive voltage is placed on the base of the transistor through a 1K resistor to limit the amount of current flowing through the base. 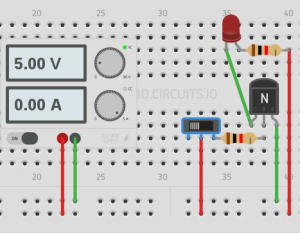 Now, if we turn on the physical switch, 5v will flow to the base through the 1K resistor, and cause the transistor to conduct. 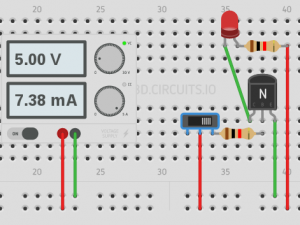 Another use of a transistor for a more advanced circuit is for amplification…   Such as the radio in your car.   By varying the current flow to the base of the transistor,  you will vary the power available to the device you are controlling, such as a speaker!

If you wish to try a more advanced implementation of using a transistor, try this link to set up a relay that is controlled by a transistor.

If you want to build this circuit yourself, but don’t have the hardware yet, try a free simulator at Circuits.IO